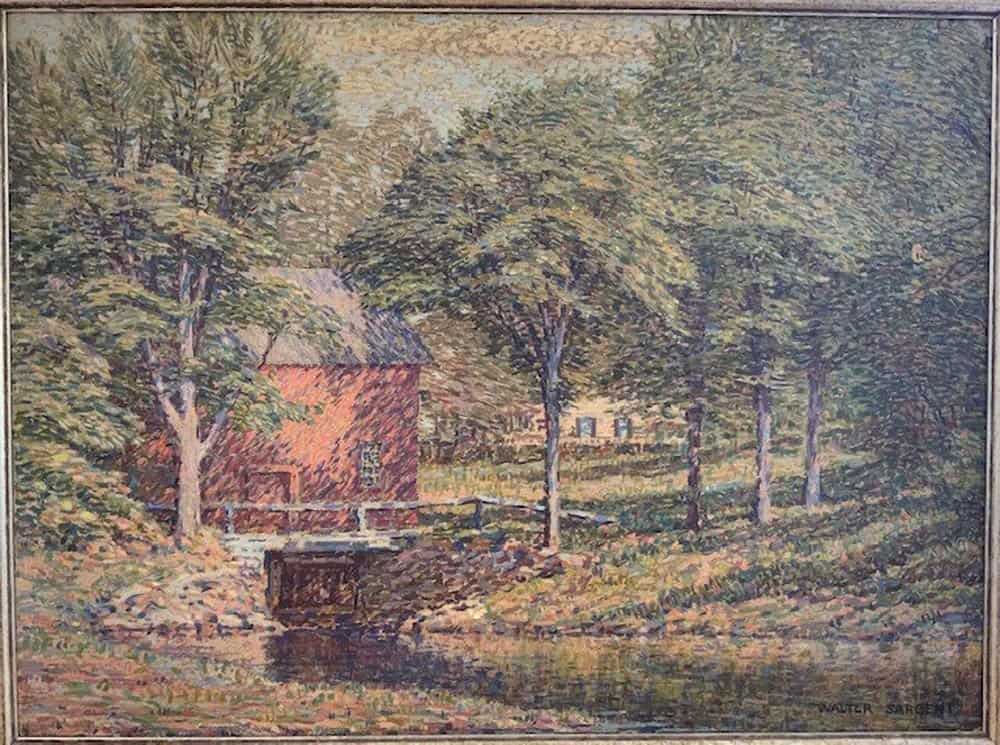 Walter Sargent (May 7, 1868 – Sept 19, 1927) was a painter, educator, and author. He was a driving force in the early days of art education and his theories of color are still used today as part of art curriculums.
The scene of this painting, the Mordecai Lincoln Mill, was a short walk from Sargent’s home on Booth Hill Road in North Scituate. Mordecai Lincoln was a blacksmith and the great, great, great grandfather of President Abraham Lincoln. He constructed the Mill in the 1690’s and today it is owned by the Town of Scituate.

Sargent was born in Worcester, MA. His interest in art began as a boy and he pursued it as hobby. He graduated from Worcester Academy in 1885, began teaching, and soon was appointed principal of a school in Grafton MA. The State’s first Supervisor of Drawing, Scituate’s Henry Turner Bailey visited Sargent’s school and saw Sargent’s artwork. He recognized his talent and encouraged him to refocus his career towards art. Sargent enrolled at the Massachusetts Normal Art School and not long after graduation accepted a position as assistant to Henry Turner Bailey, joining him in promulgating arts education in public schools. It was the start of a long professional and personal friendship that led Sargent to Scituate and to meeting and eventually marrying Emma Florence Bailey, Henry’s sister, in 1898.

Sargent toured Europe and studied painting in Paris in 1894 and again in 1898 at Académie Delécluse, one of the best-known art ateliers at the time. In 1903 he succeeded Henry Turner Bailey as State Supervisor of Drawing; in 1906 he was appointed Director of Drawing and Training for the Boston Public Schools; and in 1909 he accepted the position of Professor of Art at the University of Chicago.

Throughout his career, Sargent continued to paint and exhibit, and he authored many articles on art and art education and the books: Fine and Industrial Arts in Elementary Schools (1912), How Children Learn to Draw (1916), Art Education in the United States (1918), and Enjoyment and Use of Color (1923).

In 1924 he became an affiliate of New York University and in 1925 he was selected to be member of the Advisory Board to the Carnegie Educational Foundation of New York. In 1927 he was awarded an honorary degree of Doctor of Arts by Brown University. A few months after receiving that honor, Sargent passed away unexpectedly in Scituate.

His artworks can be found in the David and Alfred Smart Gallery at the University of Chicago, the Hood Museum at Dartmouth College, Western College, Mount Holyoke College, and Worcester Academy. He was the subject of the book Walter Sargent: Landscape Artist and Art Educator by Carol Miles (2008), his great-niece by marriage. Carol Miles served as Archivist for the Scituate Historical Society for many years and our Archives room is named in her honor.

PK-K.V.R.08 Interpret intent and meaning in artistic work. Describe what is seen in an artwork (e.g., “I see a dot; I see yellow in the corner; I see a round part”), interpret a possible meaning, and explain why the meaning makes sense.

HSS.5.T5.05 Describe the role of Abraham Lincoln in the development of the Republican Party and his actions as President during the Civil War, including the Emancipation Proclamation and the 13th, 14th, and 15th Amendments to the Constitution.