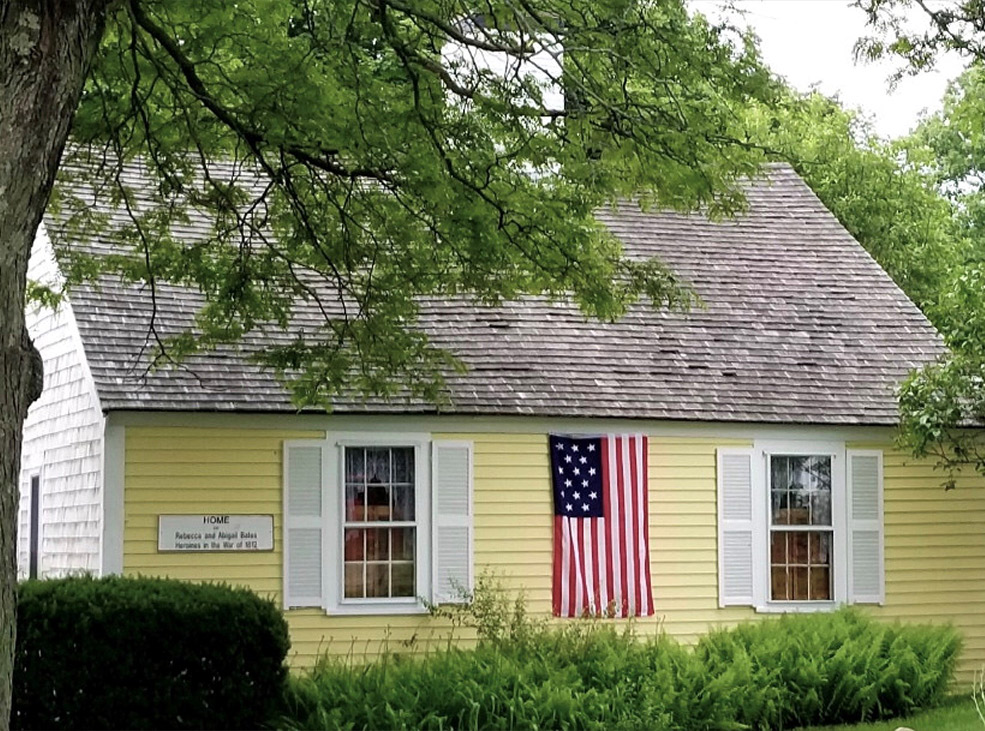 This historic home is open to the public on Society Open House dates, published each year.  Please note that this is a private residence.

The Bates House sits along a route many walk in every season. From the harbor, to the town pier, up the hill and down what was once called Beach Road. Past former boat yards, mossing beaches, all the way out to Cedar Point and Old Scituate Light. It is a great walk loaded with Scituate’s stories.

The little yellow house – nestled behind a stone wall – has been called a “miracle of a home”, having remained untouched for over 300 years while a town grew up around it.

Scituate residents know the house as the Bates House. Captain Simeon Bates, the first keeper of Scituate Lighthouse, his wife and nine children once lived at the house. During the War of 1812, Abigail and Rebecca – the young daughters of Keeper Bates – famously prevented the British from sacking the town. (Check out Scituate Lighthouse’s Explore page for more on “America’s Army of Two”.)

In 2010, seeking to protect this beloved and historic home from development in perpetuity, the late Mrs. Yvonne Twomey generously sold the property to the Town of Scituate – with the understanding that the Scituate Historical Society would oversee its care. Because the Town purchased the Bates House through Community Preservation Funds, it can never be sold – something that was hugely important to Mrs. Twomey, who was anxious to preserve the house for future generations.

Built pre-1700, the house has been home to only four families in its long history – Tichnor, Otis, Bates, and lastly Murphy – Yvonne Twomey’s family. Mrs. Twomey’s grandfather, John Clinton Murphy, purchased the home from Lorenzo Bates, a nephew of Rebecca and Abigail, in 1907. Since 1907, there have only been subtle changes made to the home.

When Mrs. Twomey’s family initially came to Scituate, they were Irish mossers. They would live in the house from May through November. Twomey once attributed the lack of renovations to her family not really needing much. The main door is still to the side of the house. The original wood beams still line the living room ceiling and a massive fireplace with bee hive oven opens to the living room and dining room. Stairs were put in to replace the ladder that went up to the second floor. A bathroom made its way into the busy summer home by the 1950s, and an addition was added to the back of the house. But virtually no changes have been made to the front, original part of the house for its more than 300-year existence.

Mrs. Twomey lived in the Bates House until her death in September, 2018 at age 93. Since February, 2019, Historical Society caretaker, Jill West, resides there – conducting open house tours, sharing the history of the house with visitors, and carrying out Yvonne Twomey’s wishes for her beloved home.

Caretaker West recently noted that while she loves everything about the house, there are certain aspects she treasures more than others.  “I love the attic. There are two rooms in the attic – a small one that was Yvonne’s bedroom when she would visit her grandparents in the summers as a small child.  We found her diary from 1932 – she would have been eight – writing about seeing an eclipse at her grandmother’s house in Scituate.” From the attic there is a clear view of the lighthouse.  “I think of all the people who must have looked out on that same view over the centuries.”