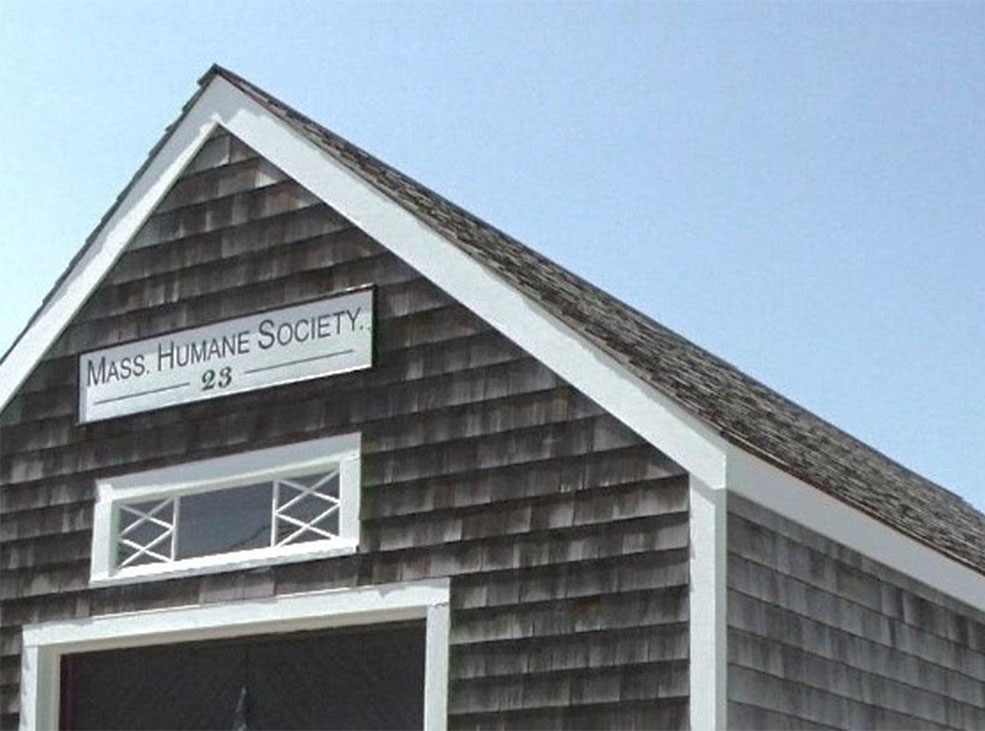 Humane Society of the Commonwealth of Massachusetts

This building is open to the public each summer, as home to the Scituate Recreation Department Sailing Program.

It was a common occurrence to see from 100 to 500 vessels of all shapes and sizes in the harbor. After a heavy storm, 5 or 6 would be ashore. Our house was always full of sailors and passengers from these vessels after the storm. The government would award us for saving lives with either a medal or $10.00 in gold. We probably collected over $700 rather than the 70 medals as the money was more appreciated at the time.

It is said there have been more wrecks on and off the coast of Scituate than any other section of our country’s coastline, including Cape Hatteras.

Salvaging ships and rescuing survivors were sobering facts of life in Scituate. When the cry went out – Ship Ashore! – farmers, shop owners, fishermen, and mossers would race to the boathouse to begin the rescue. In the early days, they were crew of the all-volunteer Humane Society of the Commonwealth of Massachusetts.

The Humane Society’s first lifesaving activities consisted of publishing procedures for dealing with victims of shipwreck, and the placement of lifesaving supplies and shelters along the most isolated stretches of coast of Massachusetts Bay. If a shipwrecked crew somehow managed to swim to shore, these huts would provide basic warmth and shelter until local townspeople could arrive. The first “hut of refuge” was built in Scituate in 1787 on Third Cliff.

The Humane Society provided training and equipment to members who constituted a coastal volunteer crew, patrolling the beaches. To reward those brave men who successfully performed a rescue, the Humane Society established an awards system of gold, silver, or bronze medals or, later, cash “premiums”.

Recognizing that even more people would be saved if boats could be launched to go through the surf, the Humane Society funded the design and construction of the first lifeboat in America. In 1807, the Society’s first life-saving station was constructed in Cohasset. Four of these life-saving stations and six huts of refuge would eventually exist in Scituate.

It was almost one hundred years after the formation of the Humane Society of the Commonwealth of Massachusetts that the U.S. government stepped in to create the U.S. Life-Saving Service. By the time that the U.S.L.S.S was created in 1871, the Mass. Humane Society was already responsible for 78 lifeboats and 92 boathouses and huts along the state’s coast.

For many years, the government-funded U.S.L.S.S. and the all-volunteer Humane Society co-existed. They often competed to be the first on the scene of a disaster. During major storms, their joint efforts meant that more lives were saved because neither organization could respond to all of the needs.

In 1915, The U.S.L.S.S and the Revenue Cutter Service were merged to form the U.S Coast Guard. The Humane Society of the Commonwealth of Massachusetts continued to maintain lifeboats and lifesaving stations along the Massachusetts coast through the 1930’s and disposed of the last of its lifesaving equipment in 1946.

Today, The Humane Society of the Commonwealth of Massachusetts continues to fulfill the mission envisioned by its founders. In the 1810s, the Humane Society was a major funding source for the establishment of Mass General Hospital, Boston Lying-In Hospital, and McLean Hospital and that commitment remains. The Society also continues to recognize those who voluntarily risk their lives to save others and funds organizations engaged in lifesaving activities.

They were mossers, fishermen, and farmers. But in the face of adversity, they became as supermen and, in their zeal, achieved what ordinary men would not have dreamed of achieving.

About Mass. Humane Society Station No. 23

During the mid-1800’s, the Humane Society of the Commonwealth of Massachusetts was constructing and outfitting life-boat stations up and down the Massachusetts coast. This building, designated Station No. 23, was originally located at Pleasant Beach, Cohasset. It was equipped with a new lifeboat, Hunt Line Throwing Gun, and other rescue gear. 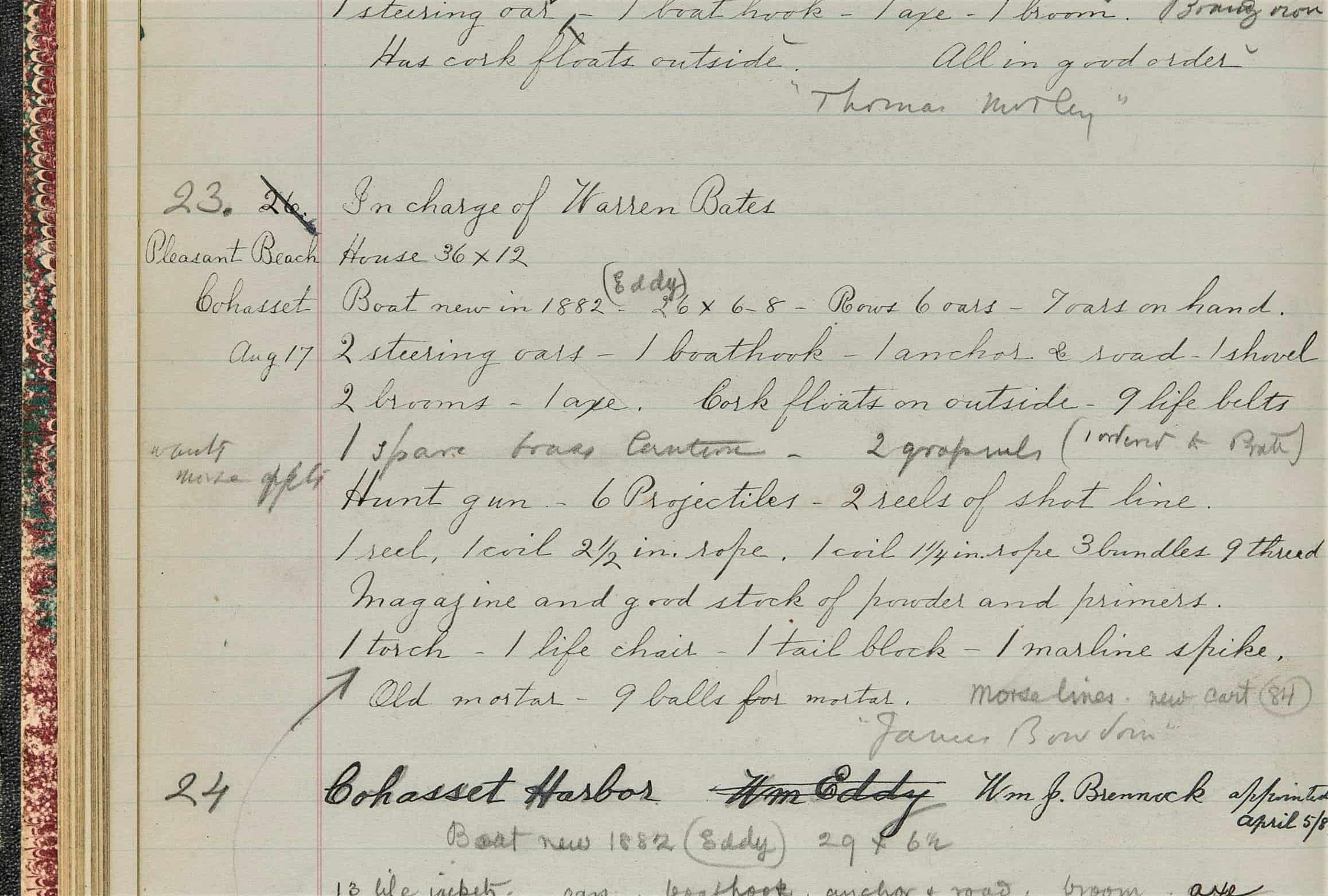 Shortly after this boathouse was placed into service, the Great Portland Storm of November, 1898 struck the New England coast. Many vessels were driven ashore including the coal barge Lucy Nichols. Volunteers from this station made a heroic, but unsuccessful attempt to reach the crew stranded at Black Rock. The rescuers were thrown into the sea, but managed to swim to shore. The crew of the Hull U.S. Life-Saving Station later rescued the Nichols crew.

By the mid-1930’s, the Humane Society was closing most boathouses. This boathouse was moved from Cohasset to Scituate’s First Cliff in 1938.

Very few of the Humane Society of the Commonwealth of Massachusetts’ boathouses exist today. In recognition of the brave and selfless individuals who served from this building and buildings like this, Station No. 23 was restored with Community Preservation Act funding in 2007.