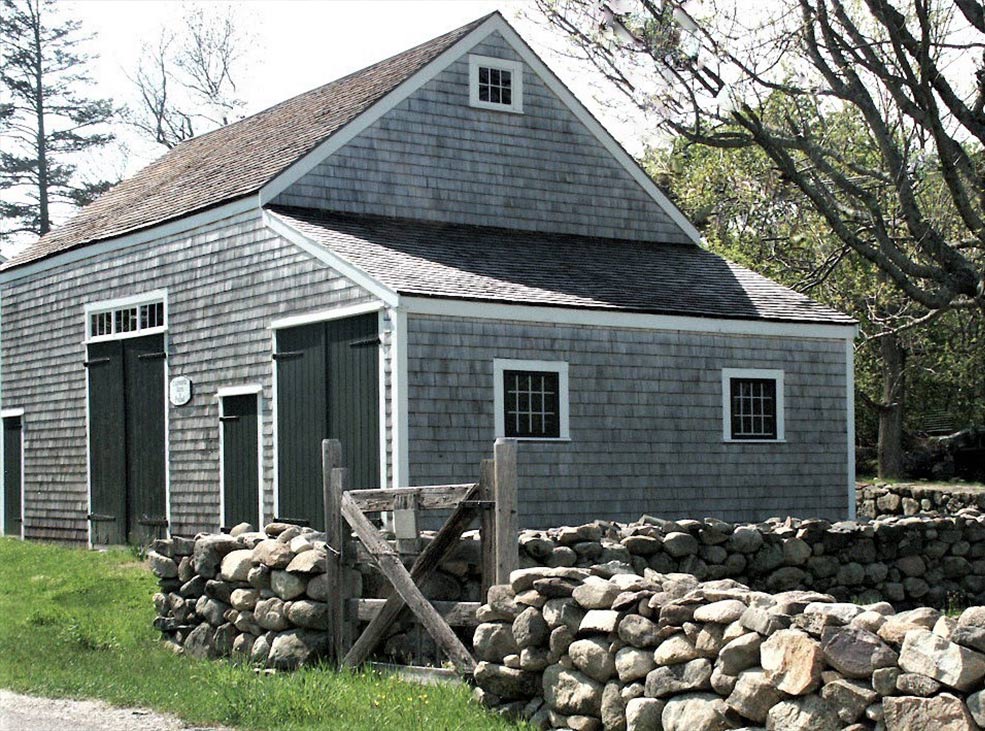 The historic barn is open to the public on Society Open House dates, published each year.  The grounds and the Animal Pound are available daily.

The Barn at Cudworth House

This barn, as well as the Cudworth House, is a monument to the men and women from Kent, England. They and their descendants conquered a rough land and severe climate. In no place is this more evident than in a typical barn.

The Cudworth Barn was built in the late 18th century, on the site of the old Kent House in Norwell (South Scituate). Prior to Mr. and Mrs. Noah Kent’s purchase of the house and barn in 1834, the property – located “west of Snow Bryant’s Corner” – was known as the Bowker Homestead.

James Bowker and his wife Mary settled in this part of Scituate in 1680. Over the ensuing years, generations of Bowkers lived, farmed, and divided the original homestead to accommodate an extended family. As Dr. Vinal wryly noted in his essay on the barn, “Three Edmund Bowkers lived at the old Homestead. To say that ‘Edmund played on the hay-mow of the old barn’ is not enough. To set forth that the property, including the barn, was bought from Warren Bowker would be simpler if we knew which Warren Bowker! In other words, searching the early history of the Cudworth Barn can become complicated.”

What we do know is that in 1834, the Kents purchased the house (with or without the barn). In 1875, William Raymond Vinal (Dr. Vinal’s father) purchased the farm and buildings. Around 1911, Colonel Lloyd Vernon Briggs – whose mother Elizabeth Kent Briggs was born in the Kent House – purchased the property. In 1930, Dr. Briggs gave the house to the First Parish Church of Norwell. The house was moved to the site between the church and the James Library. At this same time in 1930, the Kent House barn was taken apart and reassembled on the Cudworth House grounds as a gift from Dr. Briggs to the Scituate Historical Society.

Today, the Cudworth Barn contains a substantial collection of primitive tools, farming implements, and horse-drawn carriages and wagons. Among the collection of antique carriages are two of great national significance – restored by the Society with the support of Community Preservation Act funding.

The Lafayette Carriage carried the Marquis de Lafayette during his celebrated and extensive year-long tour of America – a half-century after the Revolutionary War. Billed as a triumphant tour from August 1824 to September 1825, General Lafayette visited all 24 states of the new Union in what was one of the greatest public events of the 19th century. A celebrated hero of both the American and French Revolutions, and a friend and confidante of George Washington, General Lafayette was welcomed by vast crowds from Maine to Louisiana.  (Please see link below for additional information on Lafayette’s Triumphant Tour.)

The second significant carriage that visitors will see at the Cudworth Barn is the Cushing Shay. Chief Justice William Cushing was born and raised in Scituate. After the American Revolution, in 1789, he was one of the five original justices to be appointed by President George Washington to the first United States Supreme Court. Previously, during his time as Massachusetts Chief Justice, Cushing played a major role in the 1783 court ruling that ended slavery in Massachusetts. This shay was Chief Justice Cushing’s personal carriage.

“The evolution of a Scituate barn took generations,” wrote Dr. William Vinal in his thoughtful essay The Barn at the Cudworth House.
“The way that each family fed, clothed, shod, and warmed itself was closely allied to the barn. It took sturdy, productive, self-reliant people. At first their education was in the field, the barn, and the kitchen. This kind of schooling made them strong and capable. Some of them, like William Cushing, Daniel Webster, and many others rose to places of distinction.

“In any case, the Cudworth Barn saw the age of hand-made tools, its beams were hewn by an adze and pinned with whittled oak, the iron hinges and latches were made by hand. It preceded the age of machinery and electricity. It was the school and gymnasium of generations of Bowkers – all of whom were strong, law abiding, and Americans in living and thought. The qualities that are admired in the settlers of Scituate are the qualities that were exemplified in this barn.”

Such were the specifications for the cattle pound, originally built in 1671, when it was “Voted to give Samuel Clapp eight pounds for setting up a new pound”. Any animals found wandering the young settlement were captured, placed in the pound, and cared for by the pound keeper until their owners retrieved them upon payment of a small fee.

In 1953, the original cattle pound was moved and rebuilt next to the Cudworth Barn. It was again restored in 1991 with the support of Community Preservation Act funding.