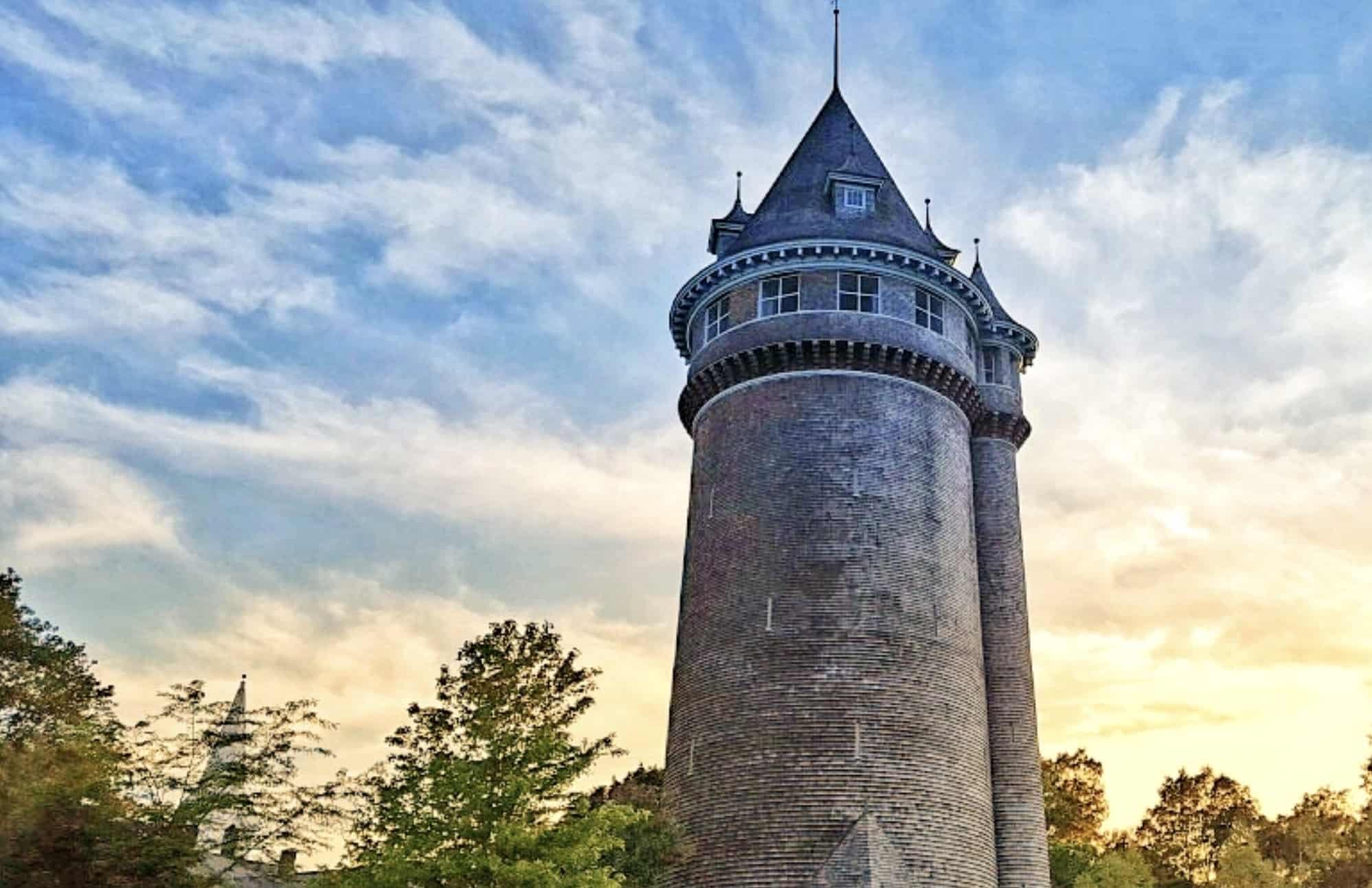 Behind the First Parish Unitarian Church and next to Central Park Housing.  The tower and gardens are open to the public on Society Open House dates, published each year.  The tower itself is not handicap accessible.

Words cannot do justice to this massive, imposing, and elegant structure. One needs to visit Scituate, hear the bells peal, and climb all 123 stairs in order to gain the full experience of Thomas W. Lawson’s Tower. It is the most beautiful, most photographed, and most expensive water tower in the world!

Thomas Lawson, a giant of the stock market in the early 1900’s, first came to Scituate as a summer visitor. Captivated by the landscape, Lawson bought over 1,000 acres on a gentle hill overlooking the ocean and set about constructing Dreamwold – his magnificent farm.

It is mind-boggling to realize how, in the short time of two years, a true village within a village was built. Here, Thomas Lawson resided with his family, and here he bred and raised “the Ideal American Horse”, Jersey cows, English Bulldogs, spaniels, and doves.  For more information, please check out Collection Highlights Dreamwold, the Farm of Thomas W. Lawson and The Lawson Collection, Vol 7.

It is said that Lawson’s wife Jeannie was thrilled with her new home until, in 1901, the Scituate Water Co. decided to build a 276,000 gallon, 153’ high steel water tank in the town center. Mrs. Lawson saw this massive standpipe as a monstrosity, and urged her husband to do something about it.

Lawson hired his architect to travel to Europe to research appropriate tower designs. The Rhine River proved to be fruitful territory, and the architect returned with a sketch of a 15th century watch tower for the Lawsons’ approval. In 1902, the Lawson Tower was constructed to enclose the water tank, funded entirely by Thomas W. Lawson.

At the top of the tower rests an elaborate set of bells that Lawson commissioned from the Meneely Bell Factory in Troy, New York. There are ten bells within the set, ranging in size from three hundred to three thousand pounds. A console system allows the bells to be played from the ground level console room via 10 wooden levers, connected to the top of the tower by chains and pulleys. For years, someone from the Historical Society has climbed the tower once a week to wind the clock so the bells will continue to play at the right time.

The water tower was used by the Scituate Water Co. from its completion in 1902 until 1988. The Town of Scituate bought the bells and clock from a declining Thomas Lawson in 1923. The Tower was purchased by the town in 1931 from the Scituate Water Co., with the Scituate Historical Society serving as its guardian and custodian. The interior’s steel standpipe that Lawson once covered is now almost completely gone, removed to ten feet in height over the spring of 2002. The tower is listed as an American Water Landmark and is also on the National Register of Historic Places. Today, a skilled carillonneur continues to play themed medleys on special occasions – on Tom Lawson’s bells heard across town.