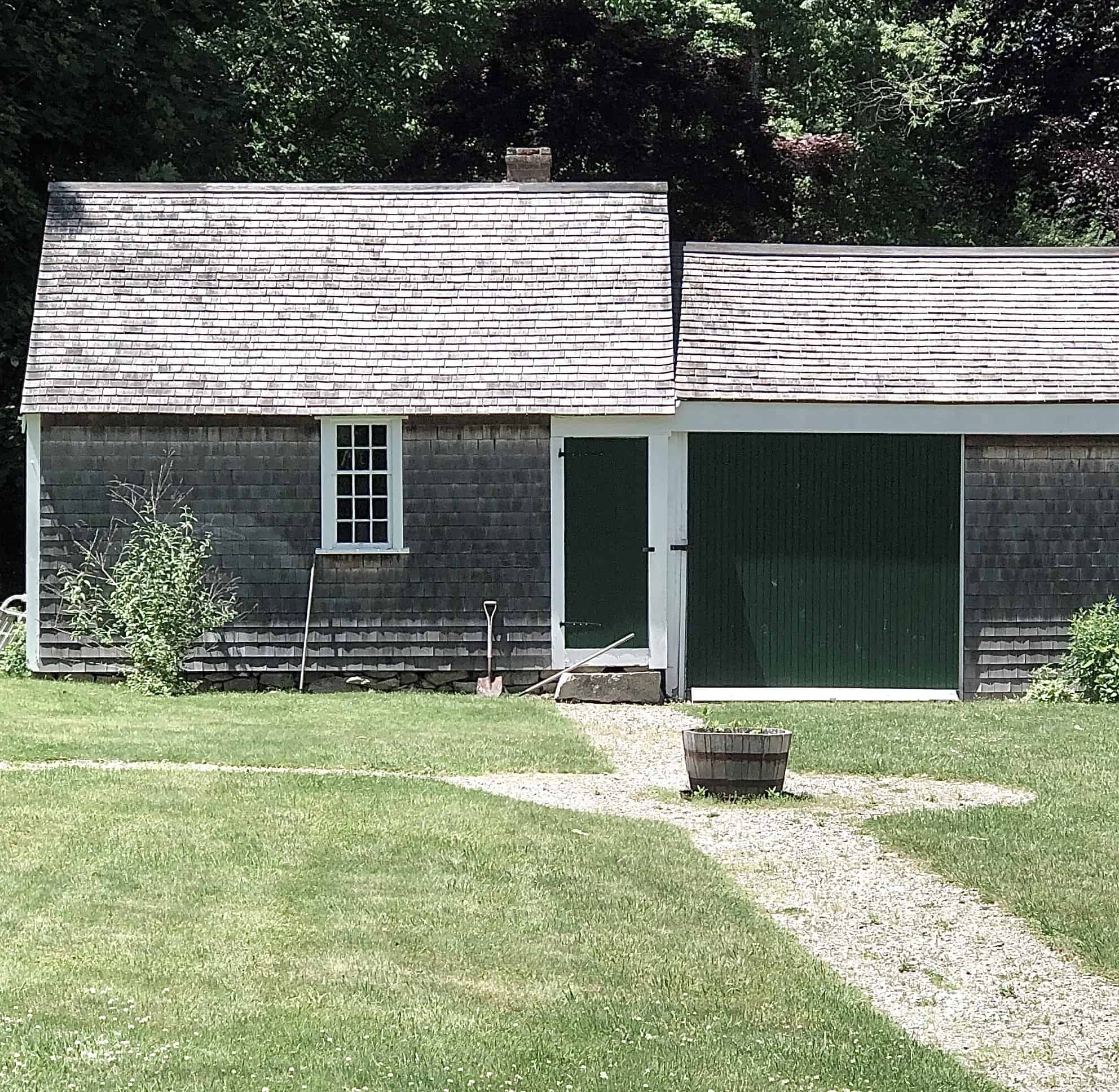 This historic homestead is open to the public on Society’s Open House dates, posted each year.  Limited parking is available at the site.

This place and its well were made famous one Manhattan summer afternoon in 1817.  On that hot day, America’s beloved poet Samuel Woodworth wrote The Old Oaken Bucket, a nostalgic poem about a cool well – thus immortalizing his childhood days spent on this Scituate farm.

How dear to my heart are the scenes of my childhood
When fond recollection presents them to view!
The orchard, the meadow, the deep-tangled wildwood,
And every loved spot which my infancy knew;
The wide-spreading pond, and the mill which stood by it,
The bridge, and the rock where the cataract fell;
The cot of my father, the dairy-house nigh it,
And e’en the rude bucket which hung in the well –

The old oaken bucket, the iron-bound bucket,
The moss-covered bucket which hung in the well.

Young Samuel Woodworth did not arrive at this spot until 1798. Indeed, by the time the Woodworth family arrived here, seven generations of Northey’s – some of the earliest of the Massachusetts settlers – had already been clearing and cultivating this land!

Today, all that remains from this early colonial period is the Ancient Ell, an extremely rare one-room house built in 1675 by settler John Northey.

Within an open section of the walls, the original nogging from 1675 can be seen.  Nogging helped to keep out the cold, but – as was the custom of the time – also served to prevent arrows from penetrating the walls. 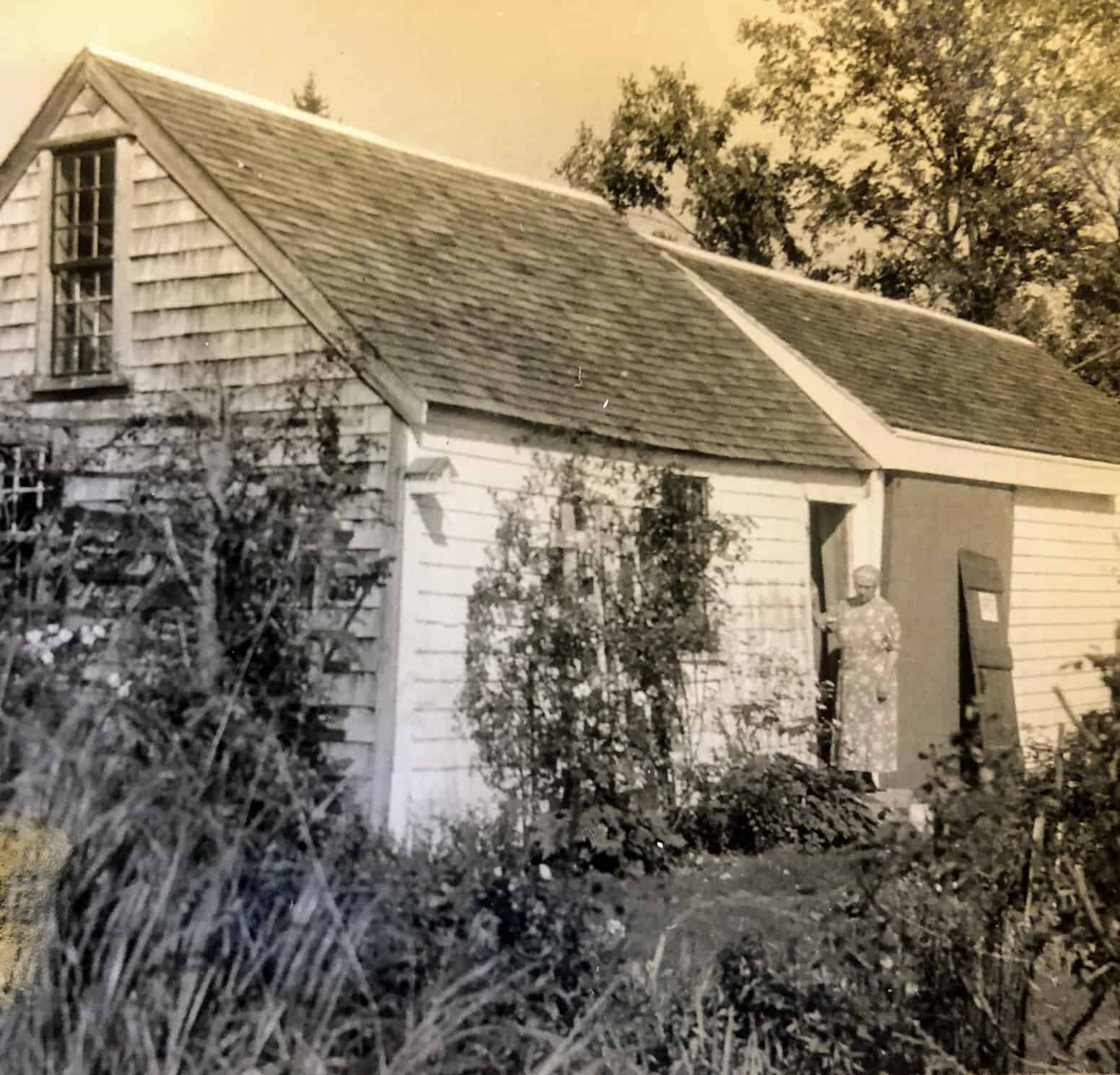 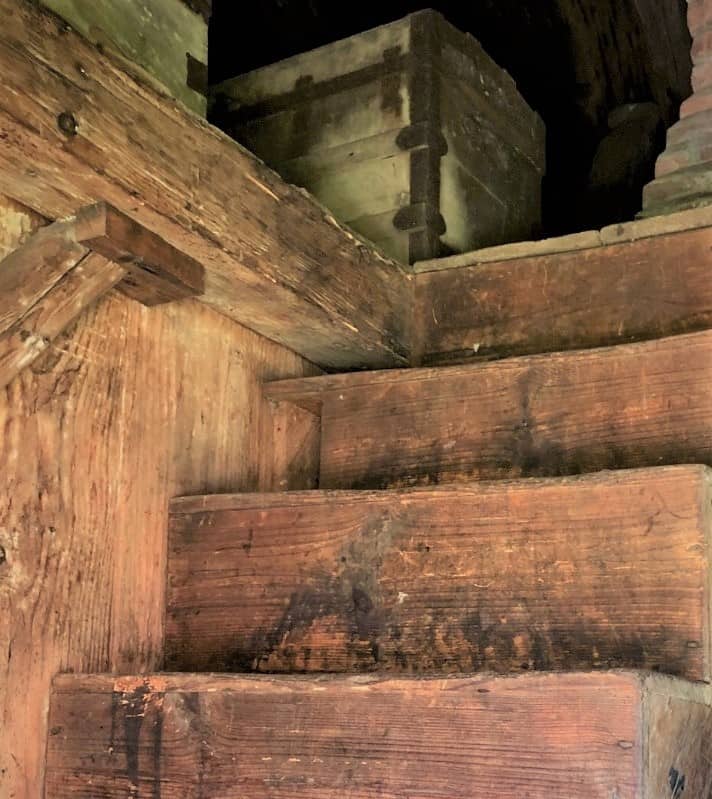 Remarkably, this Ancient Ell survived the gruesome years of King Philip’s War.  King Philip’s War lasted only fourteen months (June,1675 to August,1676) but they were devastating months. Twelve settlement towns in the Plymouth and Massachusetts Bay colonies alone were reduced to ashes. Greenbush was spared.  Over 600 settlers died and 1200 homes were burned.  An estimated 3,000 Native Americans died at the hands of the English.

It was a horrific time, witnessed by this unassuming little structure.

While the Ancient Ell was part of Samuel Woodworth’s boyhood home in the late 1700’s – early 1800’s, the farmhouse in which he was raised no longer stands.

The home “of the deep-tangled wildwood” was illustrated many years later by Scituate artist C. Wellington Furlong.  As Furlong notes, this rare view of the home, as it looked during Woodworth’s youth, is “after a copy of a sketch drawn from memory by Samuel Woodworth, the poet.” 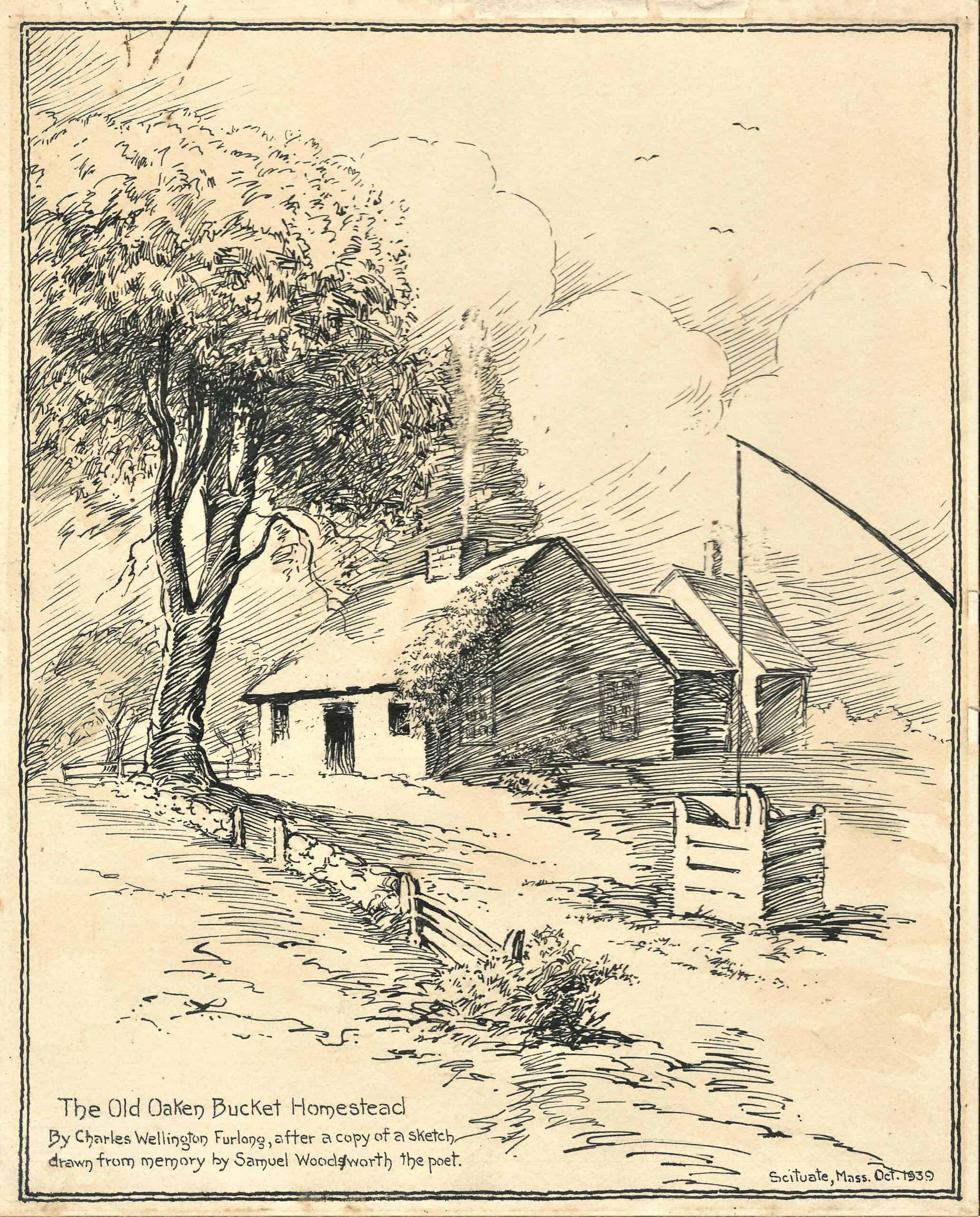 In 1825, the home known by Samuel Woodworth gave place to “a modern farmhouse of more comfortable dimensions”.   A carriage house and ice storage shed were added in 1916, and porches soon after, thus completing the property as seen today.  The Northey Family continued to farm and care for this property well into the twentieth century.  The Scituate Historical Society acquired the property in 1980.

The Old Oaken Bucket Homestead is listed on the National Registry of Historical Homes.  Thank you to the townspeople of Scituate and funding from the Community Preservation Act for the support in preserving this important and beloved site. 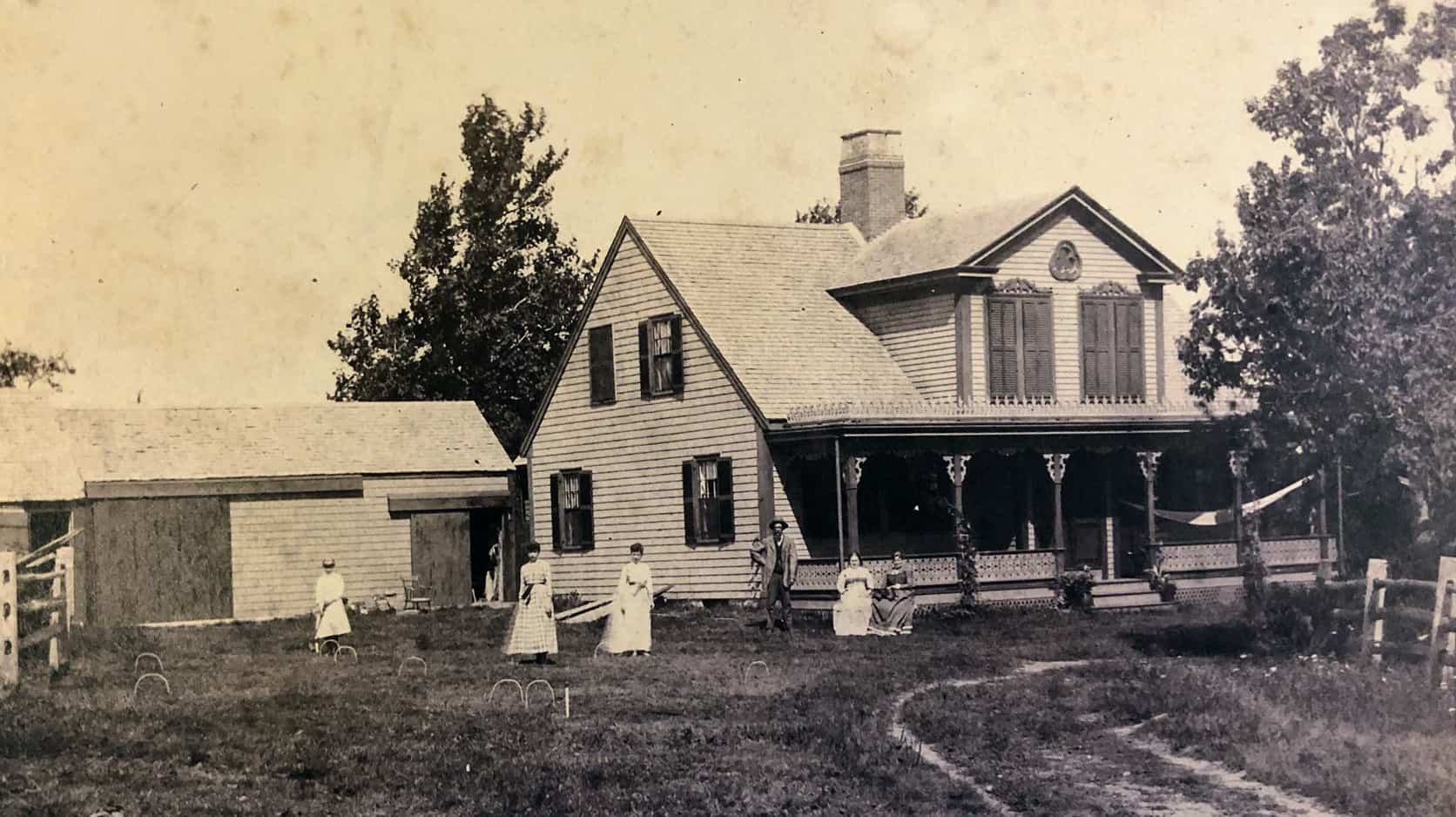 Woodworth’s personality always breathed of the same tender, loving spirit that so strongly characterizes his writings.

He attracted to his side the worthiest and the best, winning and holding the friendship and esteem of all with whom he came into contact.

Samuel Woodworth was born at Scituate Harbor in 1784.

As young boy, Samuel helped his father farm this land.  Tired and thirsty, Samuel would often drink from its  well.  Woodworth later moved to New York City to pursue a career in publishing.

In 1817, on an exceptionally hot summer’s day, Samuel recalled his boyhood days in Scituate and the fresh, cool water of the farm’s well.  These recollections resulted in the sweet poem known and later sung the world over…  “The Old Oaken Bucket”. 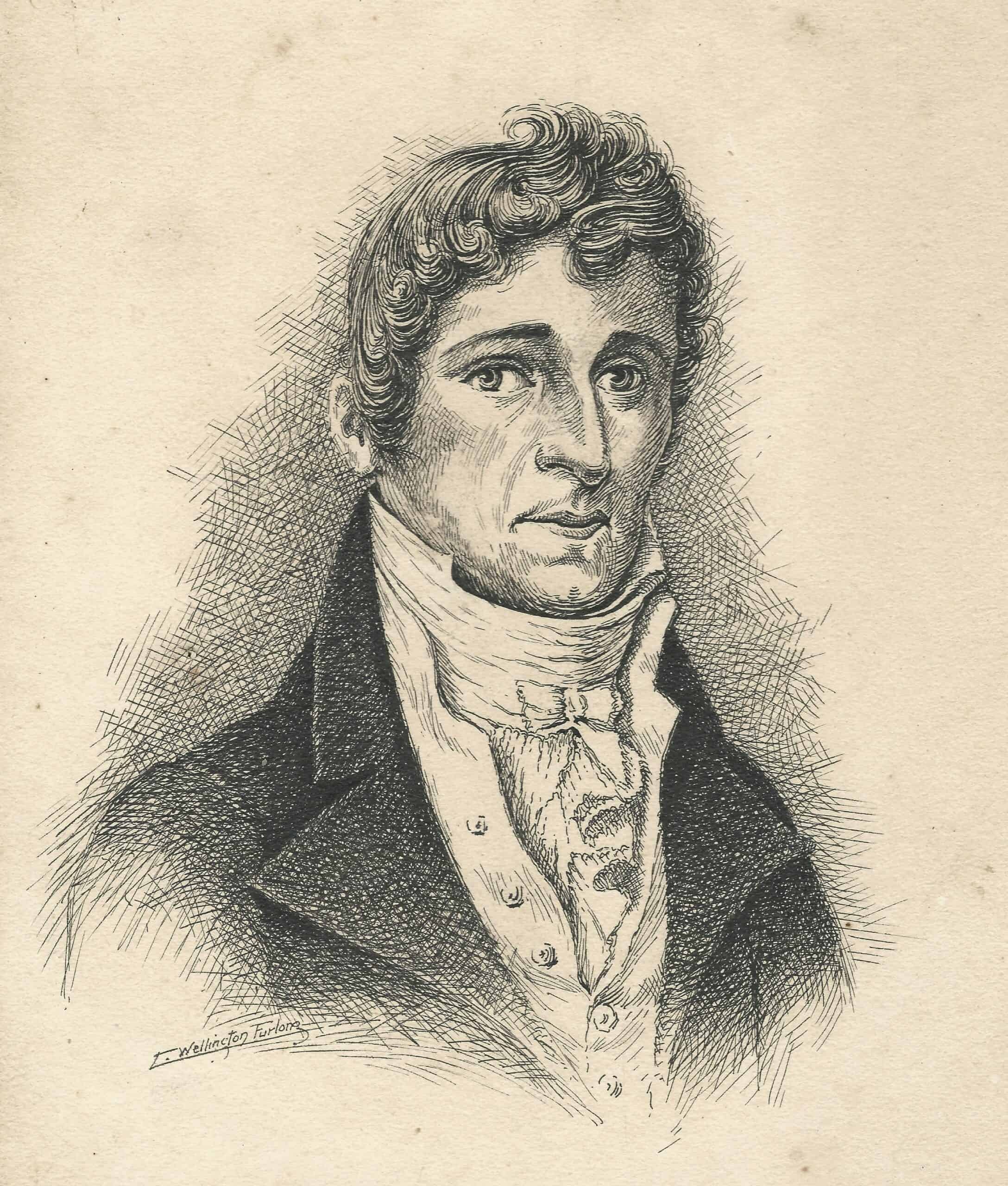 Literary lights of the day frequently gathered at the Woodworth’s modest home in lower Manhattan.  Among his close friends were Washington Irving, Edgar Allen Poe, and James Fenimore Cooper.

Widely beloved, Samuel Woodworth died in 1842, at age 58, leaving behind his dear wife and their ten children.