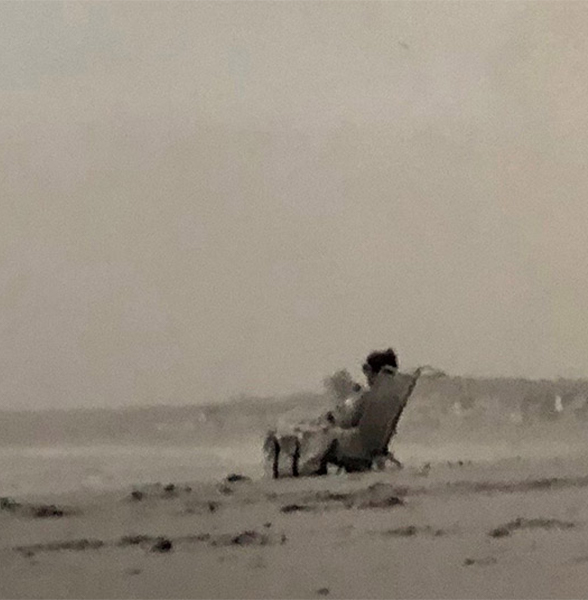 By Daisy Thompson
(“The enclosed is the best I could do with a ninety-year-old memory.”)

We came to Scituate in 1901 as summer residents and we have been associated with town ever since. At that time it was a quiet town, hardly awakened from its colonial sleep. Some of the residents had never been to Boston. The main industries of the town were mossing and lobster fishing. Front Street was tree-lined with frequent glimpses of the harbor. It was a quiet street. As I recall the only shops were Burke’s original store, Mrs. Curran’s, a quaint blacksmith shop, the cobblers, an ice cream shop kept by Doris Stenbeck and her brother and famous for its ice cream made as it was formerly made of real cream and churned on the back porch, Welch’s hardware shop, Mr. Frye’s general store that included a primitive post office, several lovely old houses and the Stanley House. Often at high tide the water overflowed the causeway and inundated the blacksmith shop. There were few houses on First and Second Cliffs. On Peggotty Beach road there were several quaint cottages, on Peggotty Beach three cottages for rent and some shack-like houses occupied by fishermen in the summer. For three summers we rented first one of these cottages. There were three or four cottages on Second Cliff; one occupied by the Tobin family, the Dorothy house, a quaint Cape Cod that Jacques Futrelle bought and razed to build the house that Mrs. Futrelle still owns, and the house with the water tower that tops the cliff. Soon people began building on Second Cliff. First my brother built an interesting house designed by Gelet Burgess. Later my sister built a house also planned by Gelet Burgess.

Life was simple in Scituate in the early part of this century. There were walks to the post office to pick up our mail, and longer ones to the Coleman Hills where we picked blueberries and beach plums. It was a town tragedy when the lovely hills were sold to the Sand and Gravel Company. In the Coleman Hills area was an abandoned summer hotel. I say abandoned because the doors had no locks and the place had been looted of much of its furnishings though beds and bureaus still remained. Ultimately it was burned to the ground.

It was our delight to watch the lobster fishermen row out to their pots, and after baiting them, returning with their catch. We had a standing order with “Ben” Tobin to deliver each Sunday morning two dozen live lobsters. His price was fifty cents a dozen. For Sunday night supper we and our guests had lobster salad garnished with slices of tomatoes, hot biscuits, one of my sister Maud’s fabulous layer cakes and much hot coffee.

The mossing industry was a fascinating and picturesque one. At low tide the mossers would shove off in their big dories, empty except for a huge, long- handled wooden rake. They rowed out to the rocks, submerged at high tide, to which the Irish moss clung. They scraped it off and with strong and graceful gestures, like pitching hay, tossed it dripping into their boats. They spread it on Peggotty Beach above the tide line. It was carefully teddied that the sun might bleach it. When the moss came out of the water it was liver-colored when wet, but as the days passed it changed colors, from it original shade to purple, to raspberry, red, rose, and oyster white. Each day the moss was teddied and gradually took on the aspect of a huge Persian rug spread out on the sands of Peggotty. The next step, when the moss was properly bleached, was to wash it and free it of shells. Back of the beach the mossers sunk huge but rather shallow barrels in which the moss was washed. The next step was to pack it in similar barrels and send it on its way to be converted into sizing or to clear beer.

Two or three years before we came to Scituate a group of women artists became summer residents. They had been studying and painting in France and when they sought summer homes they decided to settle in Scituate. First they hired cottages, later they bought. This group included two sisters, Josephine and Matilda Lewis, Theodora Thayer, Mabel Stuart and Alice Beckington. Miss Josephine Lewis, the most successful of them all, became a portrait painter. In many of the Scituate homes today hang portraits of little boys and girls painted by her. Her work was influenced by Renoir, the French painter. Miss Thayer and Alice Beckington specialized in miniatures. We became intimates of this charming group and our society soon took on a cosmopolitan atmosphere. Other painters and writers were weekend guests — Dawson Watson, a painter from London, Bliss Carmen and Frederick Hovey, two poets, Gelet Burgess and Beatrice Forbes-Robertson Hale, niece of Forbes- Robertson Hale, the Shakespearean actor, and well known actress and authoress in her own right and married to Swinburne Hale, the poet. We entertained simply and charmingly – garden parties, masquerades for which the painters designed fascinating costumes, beach parties – at that period fifteen people on the beach was a mob – tea and tennis parties.