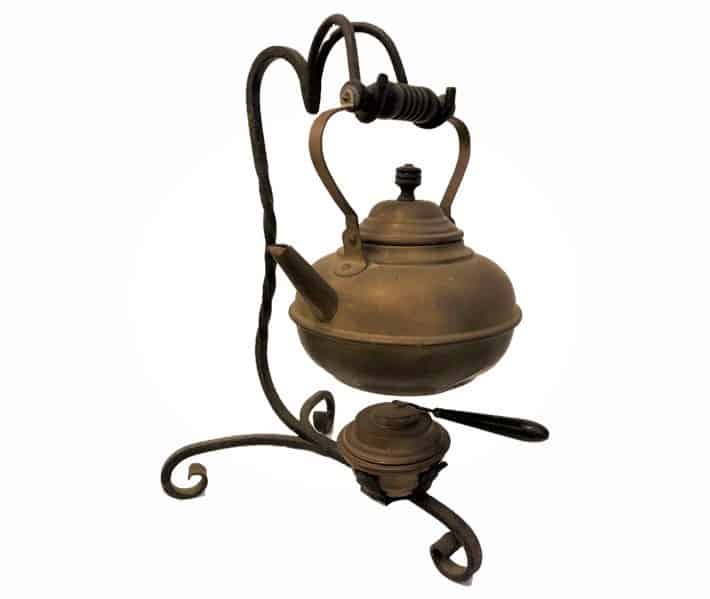 This brass tea kettle belonged to Jacques and Lily May Futrelle. Both Jacques and Lily May, known as May, were well-known writers. Jacques Futrelle was best known for his detective stories featuring the character Augustus S. F. X. Van Dusen, known as “the thinking machine,” for his extraordinary ability to apply logic. The Futrelles lived with their children, Virginia and Jacques “John” Jr. in a house called Stepping Stones on 2nd Cliff, Scituate, Massachusetts, overlooking the harbor.

Jacques Futrelle died on the Titanic, April 15, 1912, at the age of 37. The couple were returning from a trip to Europe where Jacques had reportedly written several stories. Jacques Futrelle ensured that his wife obtained a place on a lifeboat, but did not seek one himself. May is said to have last seen her husband on the deck of the Titanic smoking a cigarette with John Jacob Astor IV. May was among the survivors rescued by the Carparthia. She arrived in New York on Thursday, April 18, 1912.

May returned to Scituate and continued her writing career. Her novel Secretary of Frivolous Affairs was the basis for a 1915 film starring May Allison and Harold Lockwood. May Futrelle was so influential in the passing of a 1940 federal copyright law that President F.D. Roosevelt reportedly gave her the pen with which he signed the act into law. She was appointed the National Chairman of Copyright of the National League of American Pen Women. See Additional Information below to read a letter in which May describes her career to the “Chairman of Selectmen” in 1944.

Throughout their marriage, Jacques and May reportedly enjoyed setting aside time each day to sit together and have tea prepared in this kettle. May is said to have treasured the kettle as a remembrance of her time with Jacques. Their daughter, Virginia Futrelle Raymond, recalled that every year on April 14th, her mother would walk to 3rd Cliff in Scituate where she would toss a bouquet of spring flowers out to the open sea in memory of Jacques. May Futrelle died on October 29, 1967 at age 91 and is buried in Union Cemetery in Scituate.

May Futrelle Letter to Selectmen, 1944

3.T5, 4. Explain that in the 17th and 18th century slavery was legal in all the French, Dutch, and Spanish, and English colonies, including Massachusetts and that colonial Massachusetts had both free and enslaved Africans in its population.

5.T1, 5. Describe the origins of slavery, its legal status in all the colonies through the 18th century, and the prevalence of slave ownership, including by many of the country’s early leaders (e.g., George Washington, Thomas Jefferson, James Madison, George Mason.) 7. Compare and contrast the living and working conditions of enslaved and free Africans in the colonies in the 18th century, and explain how some enslaved people sought their freedom., d. States in the North adopted gradual emancipation (for example, Massachusetts outlawed slavery in 1783 and no enslaved people appear in the 1790 Massachusetts census); free African Americans could have families, own property, hold jobs, and earn a living.