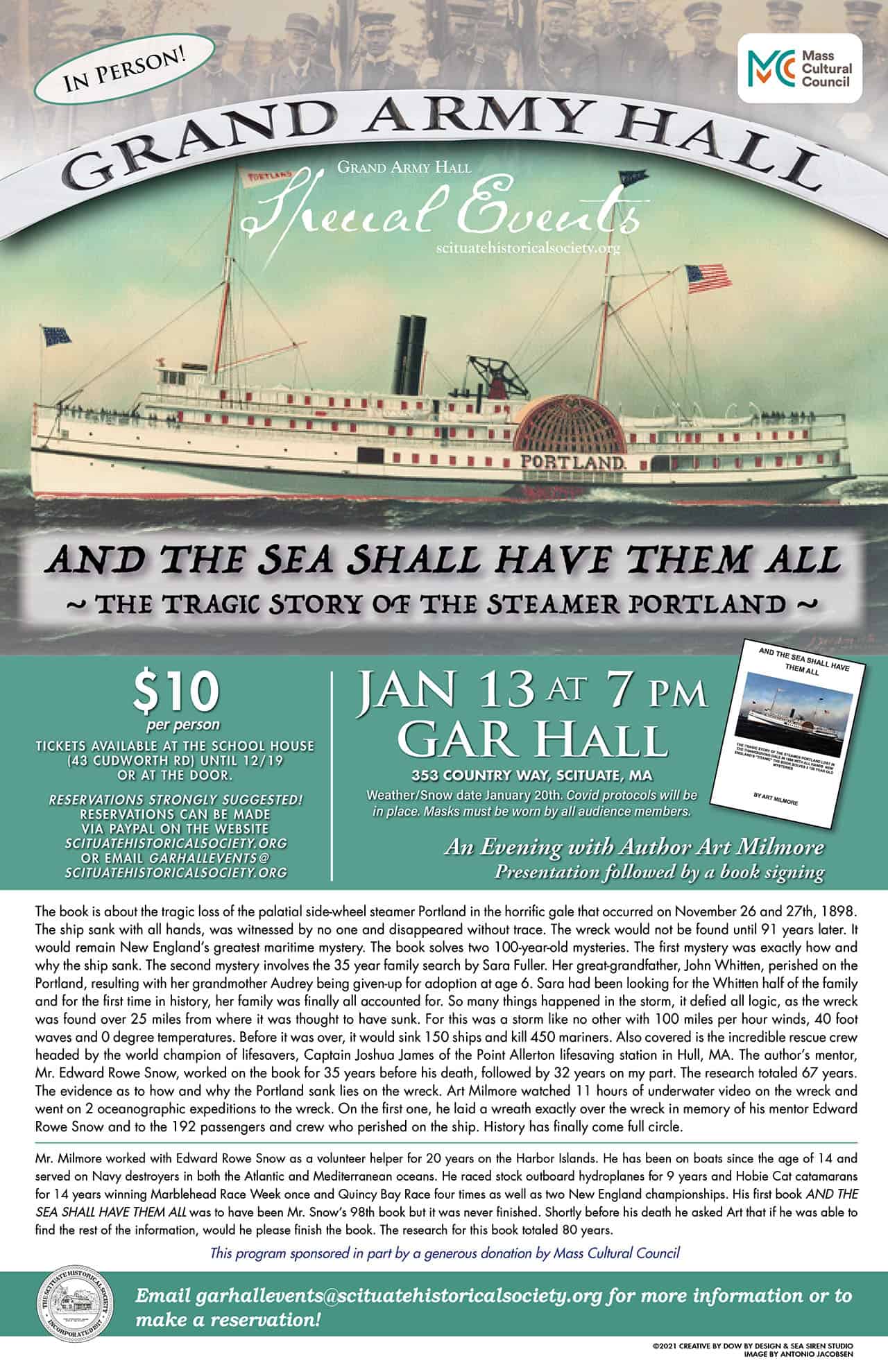 Weather/Snow date January 20th.
Covid protocols will be in place. Masks must be worn by all audience members.

Reservations strongly suggested! Reservations can be made via email at garhallevents@scituatehistoricalsociety.org

The story of the tragic loss of the palatial side-wheel steamer Portland in the horrific gale that occurred on November 26 and 27th, 1898. The ship sank with all hands, was witnessed by no one and disappeared without trace. The wreck would not be found until 91 years later. It would remain New England’s greatest maritime mystery. The book solves two 100-year-old mysteries. The first mystery was exactly how and why the ship sank. The second mystery involves the 35 year family search by Sara Fuller. Her great-grandfather, John Whitten, perished on the Portland, resulting with her grandmother Audrey being given-up for adoption at age 6. Sara had been looking for the Whitten half of the family and for the first time in history, her family was finally all accounted for. So many things happened in the storm, it defied all logic, as the wreck was found over 25 miles from where it was thought to have sunk. For this was a storm like no other with 100 miles per hour winds, 40 foot waves and 0 degree temperatures. Before it was over, it would sink 150 ships and kill 450 mariners. Also covered is the incredible rescue crew headed by the world champion of lifesavers, Captain Joshua James of the Point Allerton lifesaving station in Hull, MA. The author’s mentor, Mr. Edward Rowe Snow, worked on the book for 35 years before his death, followed by 32 years on my part. The research totaled 67 years. The evidence as to how and why the Portland sank lies on the wreck. Art Milmore watched 11 hours of underwater video on the wreck and went on 2 oceanographic expeditions to the wreck. On the first one, he laid a wreath exactly over the wreck in memory of his mentor Edward Rowe Snow and to the 192 passengers and crew who perished on the ship. History has finally come full circle.

Mr. Milmore worked with Edward Rowe Snow as a volunteer helper for 20 years on the Harbor Islands. He has been on boats since the age of 14 and served on Navy destroyers in both the Atlantic and Mediterranean oceans. He raced stock outboard hydroplanes for 9 years and Hobie Cat catamarans for 14 years winning Marblehead Race Week once and Quincy Bay Race four times as well as two New England championships. His first book AND THE SEA SHALL HAVE THEM ALL was to have been Mr. Snow’s 98th book but it was never finished. Shortly before his death he asked Art that if he was able to find the rest of the information, would he please finish the book. The research for this book totaled 80 years.